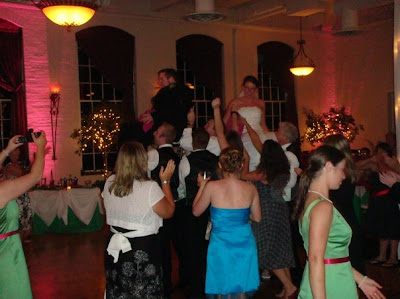 This time two years ago, we were dancing the night away at our wedding with friends and family. Wow, where has the time gone?!? So much has changed between now and then. Let's take a trip down memory lane...
2005:
Ian and I meet for the first time at a 4th of July Party in Jacksonville and I move to Tampa in December 2005.
2006:
We went on our first vacation together to Captiva Island and while there my grandmother passed away.
2007:
We move in together, get two dogs and eventually become engaged in December 2007.
2008:
We buy a house in Riverview and get married in August 2008 and Ian's grandmother passed away.
2009:
We celebrate our 1st anniversary & find out that we are expecting our first child in April 2010.
2010:
We welcome our daughter, Isabella Eve, into the world and became parents on April 5, 2010.
As the saying goes, "Time flies when you're having fun!"
Happy 2nd Wedding Anniversary to us!
Love always,
Ian, Kim & Bella
Posted by The Lasher Family at 10:00 PM No comments: 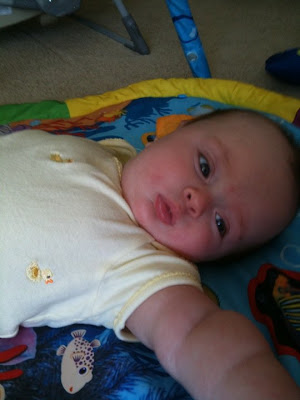 Bella has discovered that rolling over can be fun! As of today, almost every time she is placed on the floor on her back, we return to find her either on her side or on her tummy. She struggles with the arm that is underneath of her, but she practices daily to master this. She often becomes quite frustrated when she can't get that darn arm out from underneath of her body. She still isn't a huge fan of tummy time, but she's doing much better with being on her tummy throughout the day.
Great job, Bella!
Love always,
Ian, Kim & Bella
Posted by The Lasher Family at 8:00 PM No comments: 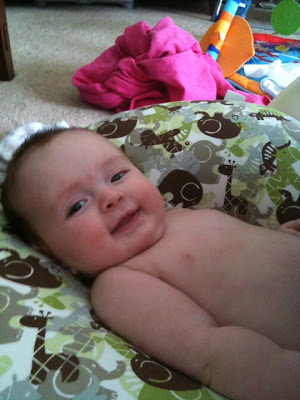 Today is Bella's 4-month "birthday"! We are in utter disbelief that our little girl is growing up so darn fast! She had her 4-month check up with the pediatrician today and did remarkably well. Here are some 4-month stats:
Height: 26 inches (97th percentile)
Weight: 17 pounds 10 ounces (99th percentile)
Sleeping Pattern: Bella is sleeping through the night and averages 8-10 hour stretches of sleep, although with the 4-month growth spurt, teething and shots, she has regressed a bit in her sleeping.
Eating Pattern: Bella eats 5-6 ounces of formula every 3-4 hours, she has also started stage 1 baby foods!
Milestones: Bella rolled for the first time, while I wasn't watching, right off the couch (poor baby). She is making attempts to roll from her back to belly, but usually only rolls over to her side. She is now teething and teething tablets are our new best friend.
Friends: Bella has been spending a lot of time with Dylan and Gabriel from MWI and Jack, too! Bella is doing a lot of "talking" these days and has been seen holding hands with Gabriel (his middle name is Adam, it's a match made in Heaven!)
Current Events: No more oil spewing into the gulf (yay!), Muslims are a step closer to building a mosque near ground zero in NYC, the ban on same-sex marriage in California has been lifted and it's been one H-O-T summer!!!
Happy 4-Month Birthday, Isabella Eve!
Love always,
Ian, Kim & Bella
Posted by The Lasher Family at 1:13 PM No comments:

The Lasher Family
We're now a family of 4, living the dream in the 'burbs of Tampa, with our loyal canine companion.